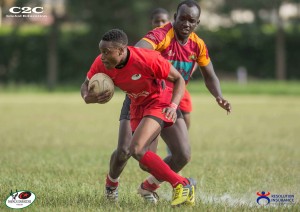 After the opening weekends’ win over Nondies’ rangers, Impala Saracens ‘Gazelles’ had their work cut out at maintaining their winning record when they faced Kenyatta University’s Blakblad.
The home team were quick to be on the scoreboard first with a quick try off kickoff through Ugandan International Saul Kibumbi, with Quinto Oongo adding the extras.
Douglas Ochako would breakaway with a blitzering run to the try box to add a second try and open a 12-0 lead. Elkeans Musonye and Harringtone Munai would equally extend a try with their brace to extend the lead further from Blad’s reach for a 31-0 score-line.
Blakblad’s Ominde (full name) would give his team the lifeline with a penalty conversion from inside the Gazelle’s 22, for his teams first points of the game. Samson Onsomu would reply almost immediately with a try off a set piece with Kwemoi(full name) slotting in the conversion to ensure a comfortable lead at .
Ominde would again restrain the difference slotting in two conversions into the interval. The Gazelle’s leading (scores).Second half
Off the break, Gazelles took from where they left; with two quick tries via Elkeans Musonye who would fend off his opponents in both instances to find the try box for a hat-trick.
Tyson Okoth also went over for a try after powering through the opposition defense as the game seemed unfavorable for the visiting student’s side. Ominde would however get a consolation for his team through a penalty conversion.
Scores would remain unchanged through to full time with Gazelles claiming their second successive win in Kenya Cup at 57-9.
Next weekend we will be trooping to the Western belt to play against Millers, Kabras sugar in Kakamega.