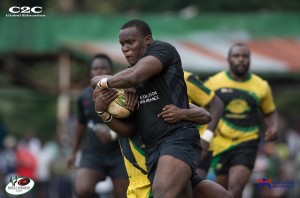 Givens Onyango of Resolution Impala Saracens evading a tackle from Jone Kubu of Kabras Sugar Rugby in a past Kenya Cup fixture at Kakamega Showground.

Resolution Impala Saracens has changed eight players to their run-on squad ahead of the Saturday fixture against Stanbic Mwamba, at Impala Club.

Three of the changes are positional adjustments to the squad that travelled to The Forest last weekend losing 25-3 to Kabras Sugar RC.

Bill Omondi starts at the inside centre, for the first time, away from his usual blindside winger place.

“The positional changes are mostly a reflection on the player profiles. We are looking at broadening the player perspectives too,” said Mitch Ocholla, the Sarries head coach.

“Otherwise, the rest of the changes are about easing the load of several players, in anticipation of a long season”

Franz Obudo starts at the loosehead prop position for Impala at Kenya Cup. He replaces last week’s Emmanuel Otieno who has started all the league fixtures todate. Otieno is loosehead replacement, this weekend.

Davis Makori returns to the tight lock position in place of veteran Paul Oimbo. Makori was unable to travel to Kakamega due to work commitments. Oimbo is on duty at the 2.00pm fixture.

Kenya Under 20 lock Frank Aduda starts at loose lock, in place of former captain of the same age group team, Tyson Okoth. Okoth has had a heavy schedule since the pre-season opener against Menengai Oilers. He becomes the lock replacement.

Duncan Ekasi returns to the squad, at the blindside flank, having missed the Kakamega trip for reasons similar to Makori’s. The backrow personnel shift sees Steve ‘Security’ Otieno go to the replacements wood.

Douglas Ochako is back at the blindside wing, after starting the first two Kenya Cup fixtures. He replaces Omondi who’s at inside centre for Ishmael Mokaya. Mokaya is at the 2.00pm fixture to ease his load having played six full division 1 fixtures in a row.

Mark Kwemoi moves into the back replacement pool, after being the Boks fullback last weekend.

The 4.00pm Kenya Cup fixture will be preceded by the Eric Shirley Shield fixture at 2.00pm with a gate charge of KSh. 300. The Resolution Insurance backed side is 5th on the 12 team log while Mwamba is 6th.