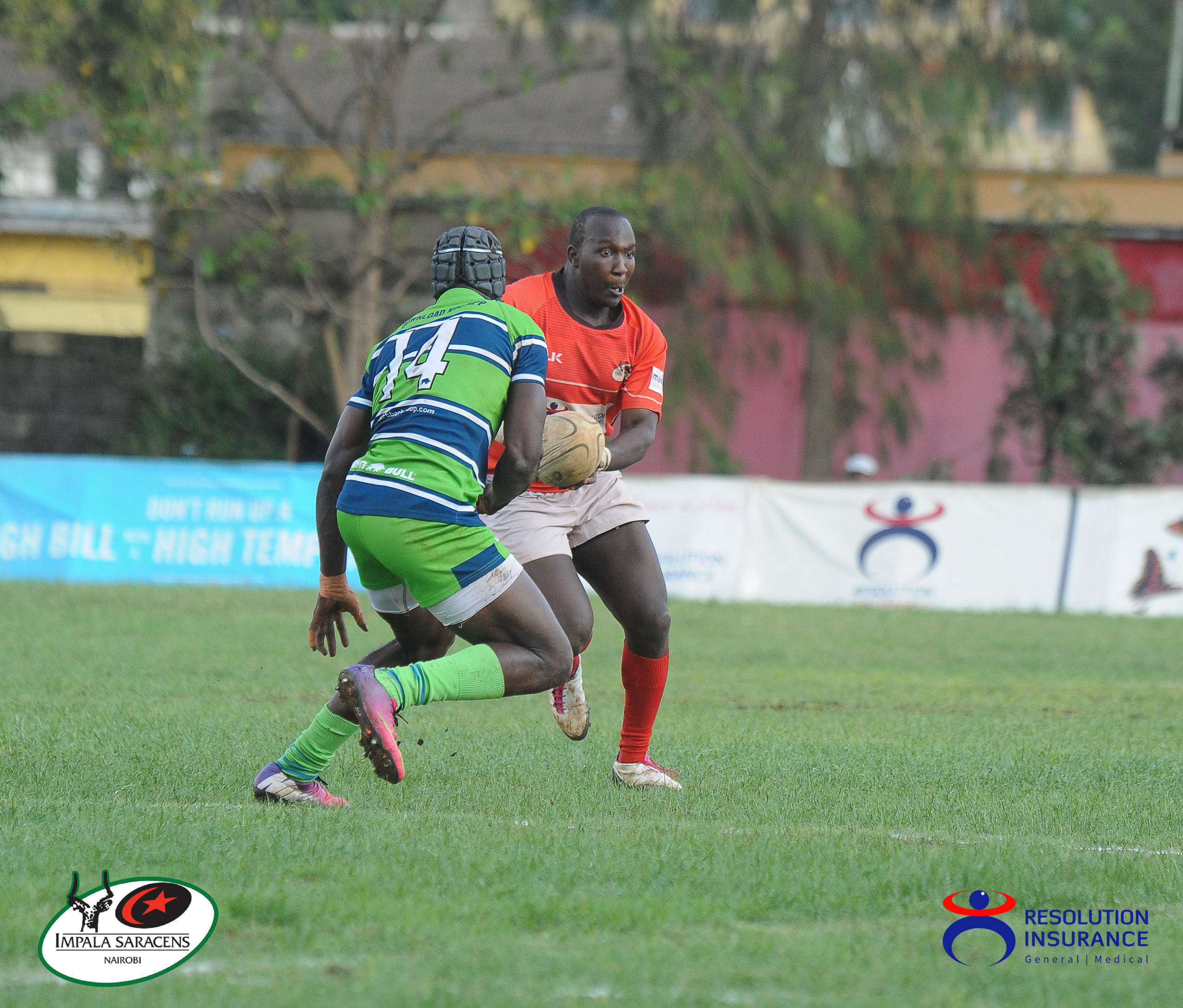 Resolution Impala Saracens’ winger – Quinto Ongo scored a penalty in the 3rd minute but KCB regrouped a minute later to score a try off maul. Curtis Lilako lay claim to the try.  Jacob Ojee complemented his effort by converting. KCB’s Chenge Davis was shown yellow for high tackle on Steve Keter in the  8th minute. Impala couldn’t use this opportunity to eke out a score. Ojee went on to split the posts in the 32nd minute. Billy Omondi shocked the KCB defence when he broke the stockades & raced 40 metres to scoring at the corner in the 36th minute. Although Quinto Ongo’s boot at the posts seemed to have sneaked in just above the cross-bar, the assistant referees’ flags stayed low.

KCB captain – Curtis Lilako saw yellow in the 53rd minute for bending the rules in contact. Although Quinto Ongo had the posts within sight, he missed the penalty. KCB’s Shaban Ahmed could have given his team 3 more points but he booted wide after striking a penalty within Impala territory. Just as Lilako was getting released from prison, Impala flanker – Tyson Okoth took over occupancy of Lilako’s cell after breaking the rule on tackle height. Quinto could have placed Impala ahead on 2 occasions, first with only 10 metres with the post in plain sight, then with 30 metres out with an almost direct aim, but he missed both. Impala fans had to wait for the 80th minute to unlock the cheer cans. Youngster – Anthony Odhiambo mustered courage to take on the kick just barely 50 metres away from the posts. His boot cast a huge cloud of despair in the far end of the Impala Club stands dotted with green replica jerseys  & ignited raucous clamouring  at the Pavilion. Impala’s win against the Bankers has assured them of a final face-off against Kabras Sugar who thrashed Kenya Harlequins 54-11 in a semi played over the fence.

Normal services have been restored. Prior to this, we hadn’t lost to KCB in five meetings, they then managed to get back and win 3 in a row. This win is important to the club. We were unfortunately beaten by Quins last weekend. This caused us to exit Kenya Cup, but it means a lot to have us back into the Enterprise Cup final. Last wear we narrowly lost to Homeboyz. Kabras still have the Kenya Cup semis to worry about. We only have 1 match – the Enterprise Cup final. We have been gifted with time, which we will use for rest & structuring for the final. I believe if we take advantage of this & become even more tactical, we will win this.